County Should Listen To Sheriff Gore on Joining Trump Lawsuit: ‘Stay out of it’ 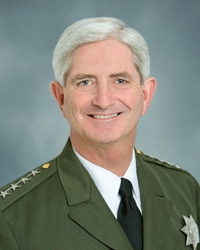 SAN DIEGO, CA -- The San Diego County Board of Supervisors is considering joining a Trump administration lawsuit against the state of California over policies that strengthen public safety for all while protecting families from the president’s deportation force.

The County Board of Supervisors plans to meet behind closed doors to discuss whether to join a federal lawsuit targeting Senate Bill 54, known as the California Values Act, as well as other state laws that shield families from Trump’s policies of hate. The City of Escondido is considering a similar move. San Diego County Sheriff Bill Gore said firmly that the County should “stay out of it”. He said his deputies should not act as immigration officers because it will deter immigrants from reporting crimes, making everybody less safe.

“County leaders and other local municipalities considering similar moves should listen to Sheriff Gore and their communities and stay out of this misguided lawsuit that threatens to rip families apart and erode the trust between our communities and local law enforcement. San Diego is a welcoming place because we understand that immigrants are valuable and productive members of our community. For the County Board of Supervisors to even consider signing on to the policies of hate of this administration in a place as diverse as San Diego is completely unacceptable and out of sync with the sentiment in our vibrant region. At the end of the day, if ICE or Border Patrol agents want to arrest and deport immigrants, they need to get a warrant, just like all other law enforcement agencies. That’s what the Fourth Amendment says. They should not be coercing local law enforcement to act on their behalf at the expense of everybody's safety.”