SB 54 went into effect on January 1, 2018. The intention of this report is to examine the ways that local San Diego law enforcement agencies have implemented SB 54 in our region. The California Immigrant Policy Center (CIPC) published a policy brief on the statewide implementation of SB 54 that outlines the general trends that are happening across the state (Gomez and Razavi). This report will address the general trends laid out by CIPC and whether or not any of our local law enforcement agencies fall into those trends.

AT A GLANCE: SEE HOW EACH LOCAL LAW ENFORCEMENT AGENCY IS IMPLEMENTING SB 54

The San Diego Immigrant Rights Consortium (SDIRC), along with other local and state partners, advocated for the passage of SB 54 in 2017, and has been closely monitoring its implementation in our region. Over the course of a year, SDIRC members and partners reached out to all local law enforcement agencies in the region and were able to meet with most of them, with the goal of understanding how those agencies work with federal immigration agencies and how they planned to change their policies to be in compliance with SB 54. 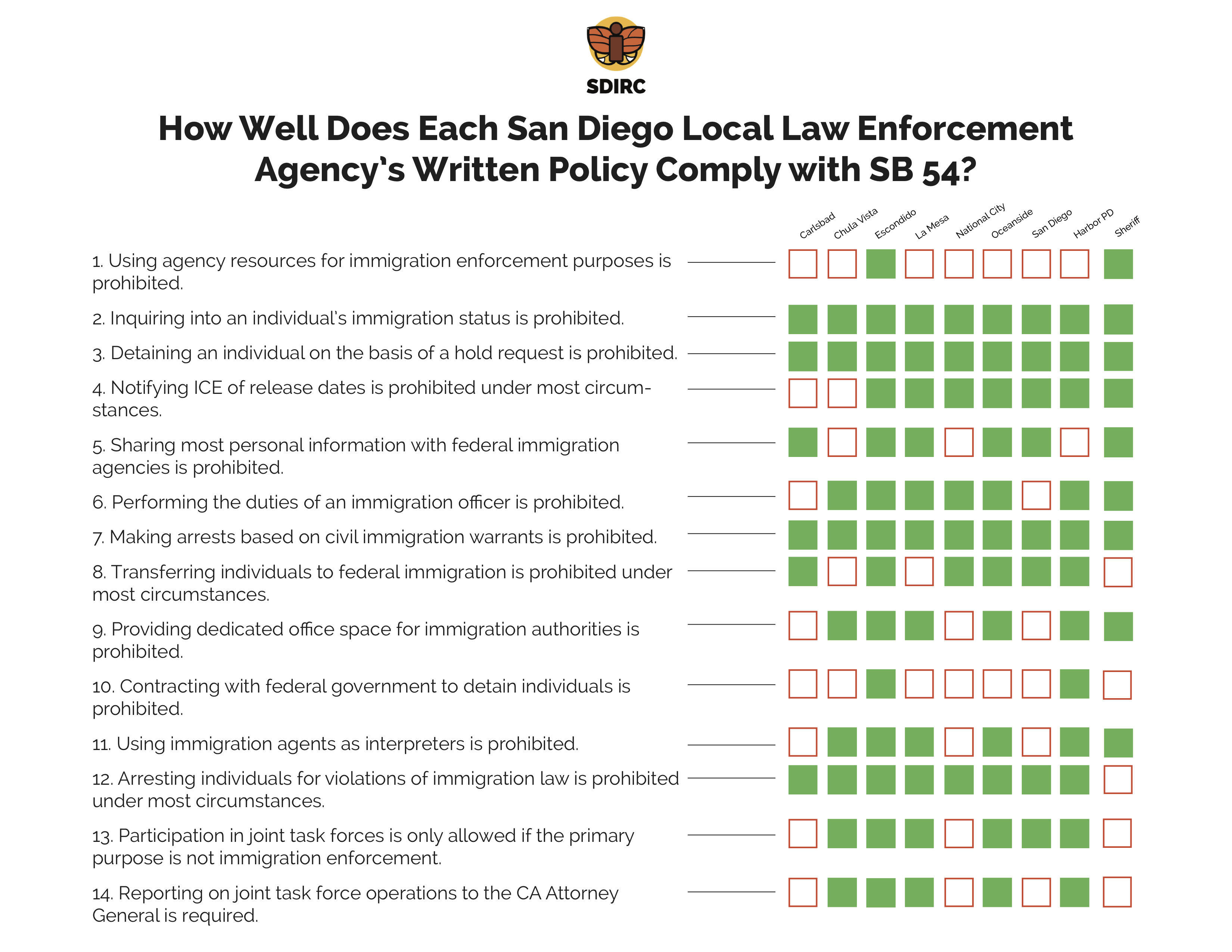 What does implementation in San Diego County look like?

CIPC outlined a number of ways that police departments might not be complying fully with SB 54 in their policy brief on statewide SB 54 implementation: lack of transparency and oversight on joint task forces agencies participate on with federal immigration agencies; shared space, resources and telecommunications systems with Immigration and Customs Enforcement (ICE); public posting of release dates and providing additional information to federal immigration; and relying on inadequate language in policies created by a private corporation called Lexi-Pol (Gomez and Razavi).

Under SB 54, local and state agencies are allowed to participate on task forces so long as the primary purpose of the taskforce is not immigration enforcement. SB 54 also stipulates that for each joint task force where federal immigration agencies are present, one of the local or state law enforcement agencies must provide reports and statistics.

Every department in San Diego County participates on joint task forces that include federal immigration agencies. The San Diego Sheriff’s policy lists 12 different regional task forces that local agencies may be participating in with federal immigration agencies. Very little information is available regarding what that participation actually entails. Additionally, while many of the departments in San Diego County specifically state that their purpose for taskforce participation is not immigration enforcement, none of the policies provide clarity around who will be responsible for reporting information back to the California Attorney General for each task force.

An additional agency, Escondido Police Department, mentions that reporting is required, but does not specify their actual role in reporting to the Attorney General. They also failed to provide any clarity around which other agency on the task force would provide the reports. So while Escondido is technically in compliance with SB 54, their policy still lacks transparency around task forces.

The lack of information on joint task forces alone is concerning and does not serve to engender public trust. The lack of clarity regarding which agency is responsible for sharing reports with the California Attorney General could put a number of our local agencies at risk with not being in compliance with SB 54.

Providing dedicated space and resources to federal immigration agencies is prohibited under SB 54. In San Diego County, we did see the elimination of dedicated office space for federal immigration and most agencies have this written in their policy.  However, we have seen agencies (San Diego Sheriff Department, Escondido Police Department) shift to having shared workspaces. For example, ICE used to have their own dedicated desktop computer and desk in the jails before SB 54. Now they no longer have their own desks and desktop computers -- they bring laptop computers and work in a shared space instead. While SB 54 does not prevent them from going into the jails, a couple of counties in the state have stopped allowing ICE to enter their facilities altogether. That is not the case in San Diego and ICE still continues to have access to individuals in custody. While no longer providing federal immigration agencies with dedicated office space is certainly a move in the right direction, the shift to shared office space and resources while not in violation of SB 54, certainly goes against the spirit of the law and does not help build community trust.

As a response to no longer being able to notify federal immigration agencies of release dates under SB 54, some law enforcement agencies statewide moved to posting release dates publicly. In San Diego County, the release dates are available online, but release dates have been available online since before SB 54 passed under the Sheriff’s “Who Is In Jail” page. The “Who Is in Jail” page is an inmate locator system that allows individuals to look up someone who is in detention, if they know the individual’s information. The Sheriff, however, did add a link that shows all of the individuals they have in custody who are currently pending release that day. This was not on the website prior to SB 54, and makes it easier for people (including federal immigration agents) to see who is being released on any given day because you no longer have to have an individual’s specific information to be able to find out when they are being released.

In their policy brief on statewide SB 54 implementation, CIPC noted that many local law enforcement agencies, particularly smaller departments, were not in compliance with SB 54 because they relied on inadequate language in policies created by a private corporation called Lexi-Pol. The model policies that Lexi-Pol created did not mirror best practices and were not fully in compliance with SB 54. While CIPC has notified Lexi-Pol of those issues, it still impacted the way that local law enforcement agencies implemented SB 54.

Similar to other agencies across the state that used the Lexi-Pol language for their SB 54 policies, the departments that used the Lexi-Pol policies on SB 54 in San Diego County had some significant gaps in their policies. SDIRC did not meet with Carlsbad Police Department, but we did meet with the other two departments to raise our concerns. Oceanside Police Department made changes to improve their policy.  At the time of this report, National City Police Department had a final draft that they were beginning to implement, but was receptive towards making changes.

On the positive side, some San Diego County law enforcement agencies are taking measures that go beyond what SB 54 requires them to do, and put specific language in their policies to demonstrate to community members that they do not enforce immigration laws.

For example, Chula Vista Police Department’s policy specifically states that they “do not do immigration sweeps.”  National City Police Department requires that in cases when an undocumented person is arrested, officers “must list in detail the reasons for the detention, including all the facts that led to the reasonable suspicion that suspect was involved in criminal activity, unrelated to immigration status.”

San Diego Police Department has not only stopped collecting immigration information on their arrest forms, but is going back and redacting that information for cases prior to the date SB 54 went into effect.

While there are areas where San Diego County law enforcement agencies have done well implementing SB 54 and have even gone beyond what SB 54 requires them to do by law, there is still room for improvement for the region as a whole.

First, all agencies must finish updating their policies to be in compliance with SB 54, and they should make those policies public. Updating and making these policies available to the public not only helps the community understand how their local law enforcement agencies are implementing SB 54, but also helps build community trust.

Second, there needs to be clarity around joint task forces – which agencies participate on which joint task force, what participation entails, and which specific agency is responsible for reporting to the Attorney General for each task force.

SB 54 was a significant win for our state, particularly in the border region where our communities are far more likely to come into contact with Department of Homeland Security (DHS) agencies than anywhere else. As implementation in San Diego has proven, there is still plenty of work to be done to both ensure that all of our local law enforcement agencies are in compliance with the law and address areas where the bill itself fell short. While we know that many of our local agencies may in practice be fully in compliance with SB 54, their policies do not necessarily reflect this. Unfortunately, practice is not enough — written policy is important for institutional clarity, as well as accountability and transparency to the public. We need our local law enforcement agencies, if they have not done so already, to put their practices into written policy. We look forward to continue partnering with our local agencies as they work to address the gaps in compliance with SB 54 as soon as possible.

At the end of the day, we must remember that the California Values Act is not a ceiling, but a floor. It is a foundation that our local law enforcement agencies can build upon, and as they work to build trust with the immigrant community, our hope is that they will work to create policies that go beyond SB 54 and provide additional protection to families in our region.

1 The requirements in this chart have been shortened from the actual language in SB 54. To see the full language, please click here: https://docs.google.com/spreadsheets/d/15c9e_qFQNkJUEQ22szVXwlbzDXX6Kk93xJV0hmi80vM/edit?usp=sharing

This report was written by Erin Tsurumoto Grassi from Alliance San Diego, using data that was collected by members and partners of the San Diego Immigrant Rights Consortium (SDIRC) during meetings with local law enforcement agencies in San Diego County.