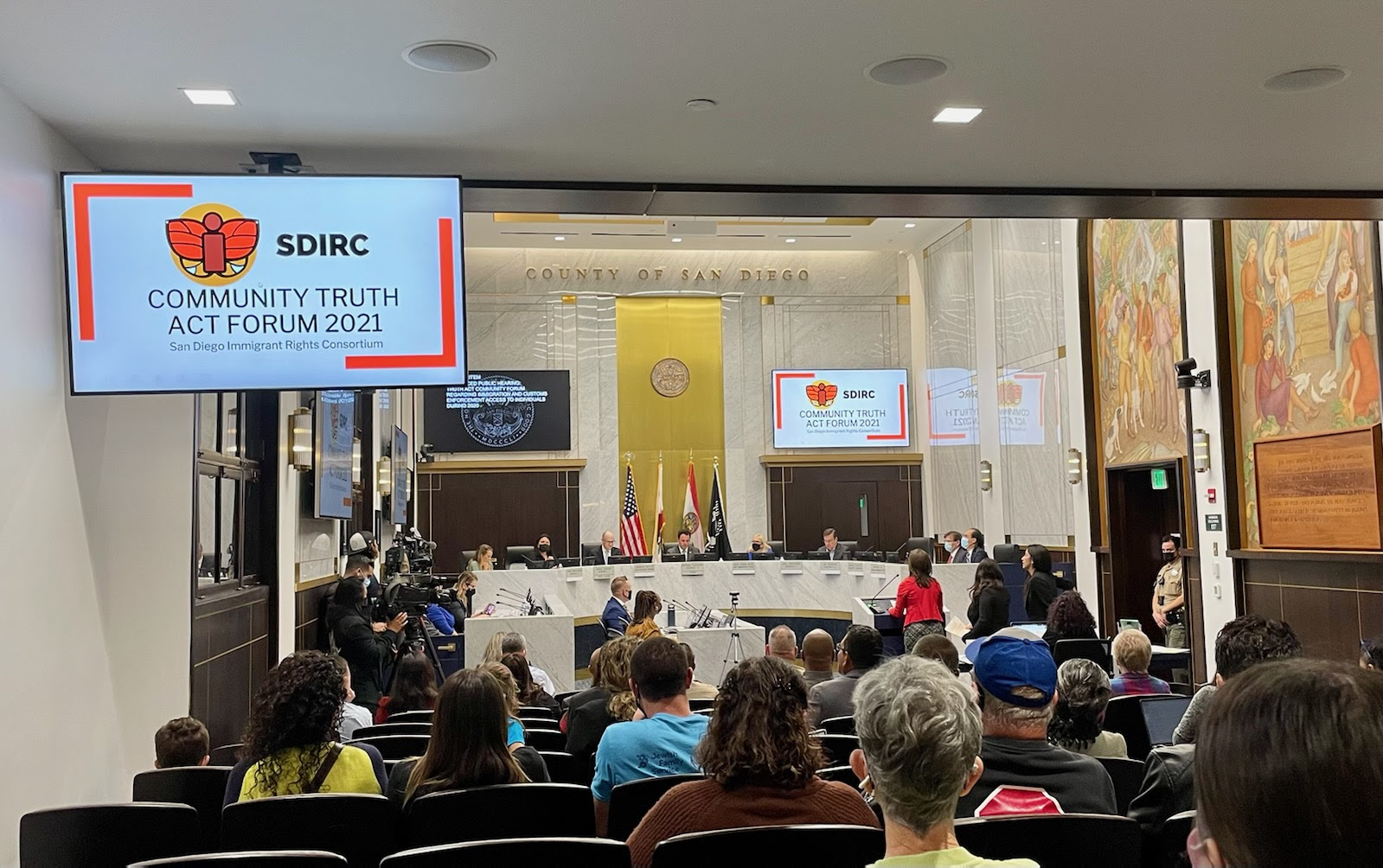 SAN DIEGO, CA - November 17, 2021 -  Yesterday evening, leaders of the San Diego Immigrant Rights Consortium (SDIRC) gave public comment and personal testimony at the TRUTH Act Forum to call on the County Board of Supervisors to immediately stop the SD Sheriff from its entanglement in ICE transfers.

Leaders from San Diego communities shared personal stories about the adverse effect of ICE transfers and the fallacy of using county resources to aid in the detention and deportation of community members that leads to devastating separation for families in our region.

The start of the public comment portion of the meeting featured SDIRC presenting its review of the SD Sheriff Department’s California Values Act (SB 54) 2020 annual report which revealed that there were 78 transfers of community members from the Sheriff’s custody to ICE. The findings from the SDIRC review also show that the Sheriff is actively choosing how to exercise his discretion to deport community members.

The data revealed in the annual report and the actions of the Sheriff underscore an alarming example of 'double punishment' where there appears to be separate systems of justice based on where a person is born.

During a question-and-answer period that followed public comment, the Sheriff used the term 'illegal aliens' to describe people held in custody undergoing screening for transfer requests submitted by ICE. The term is dehumanizing and counter to a presidential directive given to ICE earlier this year to end the use of it. The Sheriff’s use of the term especially given the context of the TRUTH Act Forum hearing, is a shocking reminder of systemic racism that undermines and erodes public trust. The impact of these words and the actions that occurred over the last year by the Sheriff’s Department affirm the SD Sheriff continues to say one thing and does another.

SDIRC and over 50 other community organizations who signed-on to a letter to County Supervisors urges our elected leaders to engage more actively to hold the Sheriff more accountable to the spirit and letter of SB 54 by ending all ICE transfers, notifications and the use of county dollars to aid in the deportation of San Diego community members.

We are outraged that Sheriff Gore referred to our immigrant community members as “aliens” last night. Such language is racist, xenophobic and dehumanizing. The rhetoric Sheriff Gore used is divisive and failed to acknowledge that the reason our county is safe is precisely because we have a vibrant immigrant community. It is clear that Sheriff Gore does not have the best interests of the entire San Diego community in mind, and his policies reflect that. We call upon the Board of Supervisors to help us stop the Sheriff from using county resources that facilitate the detention and deportation of our community members.

The Sheriff is doing the bare minimum to comply with SB 54, and that is not enough. It is time for our County to go beyond SB 54 to protect all of our community members, and stop upholding a justice system that treats people differently depending on where they were born. Our Sheriff needs to immediately stop ICE transfers and notifications.

Community safety is based upon trust. The San Diego County Sheriff’s department has been colluding with federal immigration agencies for decades. As a result, the community does not trust local law enforcement, and that impacts the public safety of all San Diegans. It is time for the Sheriff to end entanglement with DHS agencies.

Nearly two decades ago, I was transferred to ICE by the Riverside Sheriff and deported to Mexico. As a result of the Sheriff transferring me to ICE, I was unable to get the legal representation that I needed to fight my case, and spent years separated from my family who lived in the U.S. Although it was the Riverside Sheriff that transferred me, the San Diego Sheriff has the same policy and is utilizing the same unfair and unnecessary practices. No one deserves to go through what my family and I went through. I call upon Sheriff Gore to immediately stop using county resources to help detain and deport our community members.